2022-04-26
As we all know, the waste gas treatment in the pharmaceutical industry is also quite different from other industries, because if the TO system of the pharmaceutical industry is blocked, there will be a lot of water-soluble salts in the blockage, and the proportion of salt at the induced draft fan is relatively high. high, the salt at the inlet of the RTO system is lower. It may be that the salt is entrained in the exhaust gas of the workshop, or the salt produced by the reaction of acid-base exhaust gas is formed by contact with the fan impeller. The decrease in the salt content at the inlet of the RTO system may be caused by the partial thermal decomposition of the salt under the action of hot air, and the salt content in the outlet of the RTO system appears obvious. The increase, should be a new form of salt component formed by cooling after combustion.
Combined with the characteristics of RTO incinerator waste gas components in the pharmaceutical industry, which mainly contain hydrochloric acid, dichloromethane, ammonia, etc., it is inferred that the blockages at the RTO inlet are mainly two salts, ammonium chloride and ferric chloride. After testing, the proportion of the components is approximately Ammonium chloride accounts for 70% and ferric chloride accounts for 30%. This also led to the obvious blockage of the RTO equipment during production, and the degree of corrosion of the exhaust gas equipment by acid gas should not be underestimated. The components of the exhaust gas treated by different RTO systems are different, and the blockage situation and the composition of the blockage will change to some extent, but the composition of the blockage can also be roughly judged from the composition of the exhaust gas entering the RTO.
From the analysis of the blockage and its causes, the measures to solve the blockage are mainly to reduce the particulate matter content in the exhaust gas, the concentration of acid and alkali components, the concentration of halogen-containing exhaust gas and the stable RTO operating temperature, etc. Improvements in areas: 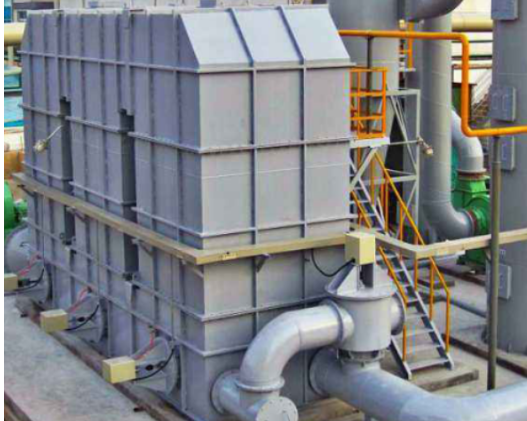